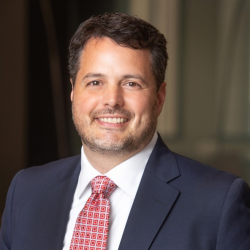 Christopher is the Chief Operating Officer for the Bush Foundation. He serves as a key member of the Foundation’s leadership team and provides coordination and integration for many of the organization’s functional and operational areas.  Christopher is inspired by the opportunity to support the Foundation's strategies and key initiatives, and to grow its impact in community.

Christopher joined the Foundation in 2022. He previously served as the Executive Director for Seward Redesign, a community development corporation that leads real estate and economic development initiatives in South Minneapolis. Prior to that, he was the Chief Operating Officer for the Center for Economic Inclusion. His experience also includes diverse leadership roles at Thrivent Financial and as the Executive Director of the Riverview Economic Development Association. He has provided leadership to multiple Boards of Directors and community committees, most recently as the President of the Latino Economic Development Center and as a member of the leadership coalition supporting the healing and recovery of the Lake Street corridor in Minneapolis. Christopher is an alumnus of the Peace Corps and served as a small business consultant in Nicaragua.

As a 2010 Bush Fellow, Christopher received his MBA from the University of Minnesota’s Carlson School. A long-time resident of south Minneapolis, he enjoys spending time camping, fishing, and in the parks and lakes around Minnesota with his wife and their three teenage children.