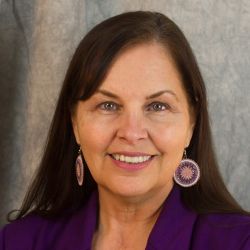 Cynthia is the president of the Cankdeska Cikana Community College (CCCC), one of 37 tribal colleges and universities in the United States that were established in response to the failure of Native students at mainstream institutions. CCCC is located at Fort Totten, North Dakota, on the Spirit Lake Dakota reservation.

Among her many leadership roles, Cynthia was a founding member of the National Indian Women’s Health Resource Center and a committee member that advised the Director of the National Institutes of Health. She also served as the former executive director of the North Dakota Indian Affairs Commission before becoming president of Cankdeska Cikana Community College in 2003.