Grant for Native American Community Board

Lake Andes, SD — In recognition of winning a 2018 Bush Prize for Community Innovation, this grant will advance the organization's charitable mission to address health issues pertinent to its community through cultural preservation, education and coalition building

Native American Community Board (NACB) protects the health and human rights of Indigenous people on and near the Yankton Sioux Reservation. Through a highly effective combination of direct service and advocacy, the organization has proven that it can reduce violence and promote safe communities for women and children.

NACB turns to its community to identify needs and develop solutions. Its groundbreaking work includes the Native American Women's Health Education Resource Center, one of the first resource centers of its kind in the U.S. The center combats domestic violence and sexual assault among Native women, who are more likely to be assaulted than any other racial group in the country. Its multifaceted approach includes support for women, re-education for men, training for law enforcement and an awareness campaign to engage the entire community. NACB also led efforts to make it easier for Native women to report incidents immediately, resulting in more responsive tribal courts.

The organization's tenacity and achievements at the local level have attracted national attention. NACB's recent success to ensure over-the-counter emergency contraception for Native women on reservations led to a partnership with the American Civil Liberties Union and Amnesty International to shape national health policy for American Indians. 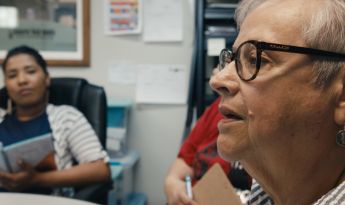 Learn how Native American Community Board takes an organic approach to problem-solving.

See all grants for Native American Community Board