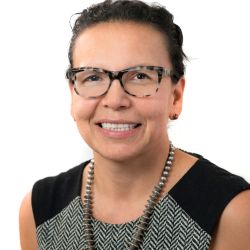 Jodi Archambault (Hunkpapa and Oglala Lakota) currently serves as a strategic advisor. Prior to that role, she worked for the D.C. law firm of Sonosky, Chambers, Sachse, Edreson and Perry in 2015 after serving as a political appointee under the Administration of President Barack Obama. During her tenure under the Administration, Jodi served as the Special Assistant to the President for Native American Affairs for the White House Domestic Policy Council, Deputy Assistant Secretary to the Assistant-Secretary Indian Affairs at the Department of the Interior and separately as the White House Associate Director of Intergovernmental Affairs.

Jodi served as the executive director of the Native American Training Institute in Bismarck, N.D., a non-profit offering technical assistance and training to tribal, state and local governments in human service delivery systems.

She earned a Bachelor of Arts in Government and Native American Studies from Dartmouth College and a Master of Public Policy from the University of Minnesota’s Humphrey School of Public Affairs.