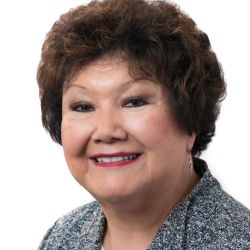 Kathy Annette retired as the president of the Blandin Foundation in 2020. A lifelong resident of rural Minnesota, Kathy grew up on the Red Lake Indian Reservation and is enrolled with the White Earth Band of Ojibwe. She became the first female Ojibwe physician from her White Earth Chippewa/Ojibwe tribe after earning both her undergraduate and medical degrees from the University of Minnesota.

Kathy joined the Blandin Foundation following 26 years of distinguished service with the federal government. She served as deputy director of field operation of Indian Health Services, based in Bemidji, Minnesota, and was awarded Presidential Meritorious Awards and a Presidential Distinguished Service Award of the U. S. Government. Kathy is a member of the Northwest Minnesota Women’s Hall of Fame at Bemidji State University and was the first woman inducted into the Academy of Science and Engineering at the University of Minnesota, Duluth.