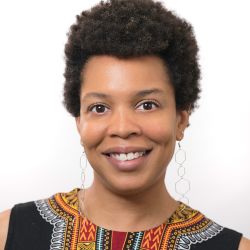 Khamara joined the Bush Foundation in March 2018. Before moving to the Twin Cities, Khamara lived in San Francisco where she worked at the world-renowned Exploratorium as an Explainer Supervisor. She was also heavily involved in the theater community in the Bay Area and participated in many sides of the theatre-making process including writing, producing, directing, and acting.

Khamara has a bachelor’s degree in Political Science from Washington University in St. Louis and a professional certificate in Acting from the American Academy of Dramatic Arts in Los Angeles. Her current community work includes serving on the Cultural STAR Board for the City of St. Paul, on the School Governance Committee of the Friends School of Minnesota, and on the Generation Listen Advisory Council at MPR.

Khamara lives in St. Paul with her daughter and two cats.