From the point of view of Ernesto Velez Bustos (BF’15), the story of migrant and immigrant communities is best understood as one of evolution over time. That’s especially true in southern Minnesota and the agricultural community of Owatonna.

“We saw these populations established in the last half of the 1990s to 2004-2005,” Bustos says of the people who arrived from Mexico and Latin America for agricultural and canning jobs in the area. “Those people stayed, they got some factory jobs that paid well, and now they’ve been here for 15 years, and for the past 10 years have been stable. They’re growing generationally, and now things are more complex because we’re dealing with three different generations’ experience.”

Bustos arrived in the United States from Morelos, Mexico, when he was 19 and moved to Owatonna. As a young man he “did a little bit of everything,” including restaurant work and working on pipe systems for golf courses. In 2004, he started a job as a community organizer for Centro Campesino, a nonprofit advocating for Latino immigrants and migrants, and today he serves as the organization’s executive director, a role he has held since 2012.

"Between all the work and outreach we did throughout the year, we would engage and touch more than 20,000 folks."

In the beginning, Bustos’s work focused primarily on need-based programs: childcare for local migrant farm workers, who were housed in camps outside Owatonna, and labor rights and immigration reform for a community that lacked access to levers of power and was often on the disadvantageous side of a language barrier.

“Between all the work and outreach we did throughout the year, we would engage and touch more than 20,000 folks,” Bustos says, a number that the organization meets or exceeds annually today.

Centro Campesino has evolved along with its community, and Bustos, recipient of a 2015 Bush Fellowship, pursues a vision that draws together southern Minnesota’s Latino community to face broader regional concerns and challenges, pulling together the resources and talents of a wide range of community members and organizations.

“One of the biggest challenges is capitalizing on our current generational wealth that exists in this community,” Bustos says. “Not all of us own houses. Not all of us transfer wealth to the next generation. This lack of status has kept us out of decision-making since the 1990s.”

Part of Centro’s work focuses on another prong of this effort — working with tradespeople and workers to gain accreditation for skills they developed in their home countries — along with ongoing priorities in education, healthcare, general labor rights and immigration law. The longest-term priority, as it should be for a maturing community, is on youth.

“We don’t capitalize on all the talent that we have, and that includes concentrating on the demographics,” says Bustos. “We have a talent flight to the (Twin Cities) metro. I don’t think there’s enough intentionality on the local level so that youth can have a bright professional future right here in rural Minnesota.”

Bustos works in partnership with organizations in communities including Red Wing, Worthington and Rochester, and he increasingly looks at challenges and opportunities in trade, agriculture and climate and how future generations will approach them — building a bridge to a future in which all people co-create a whole stronger than the sum of its parts. 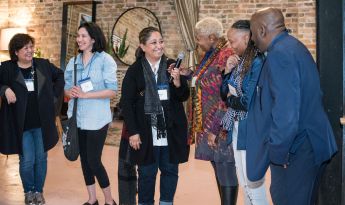 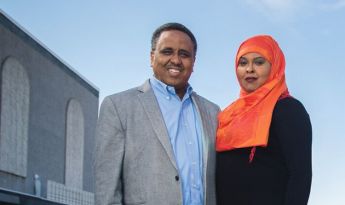 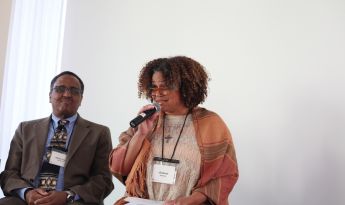