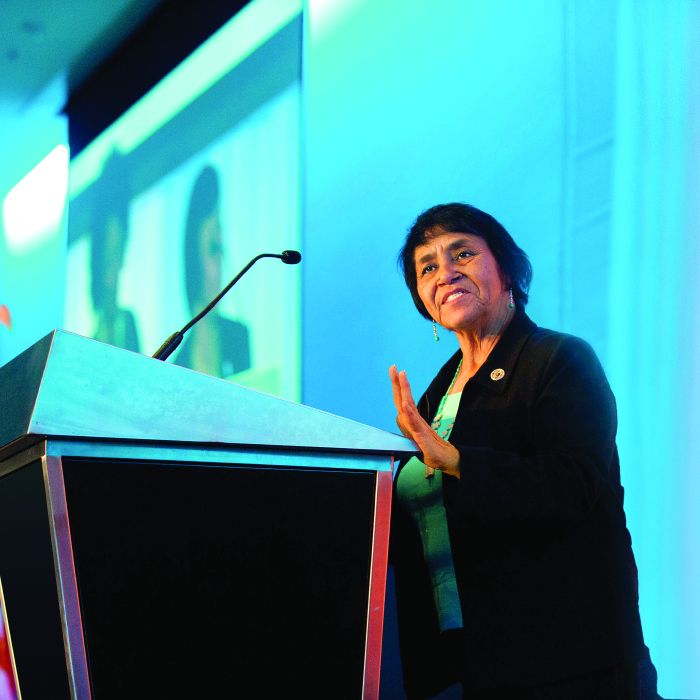 Translation: The constitution of the White Earth Nation.

Erma Vizenor came home to White Earth Nation in 1991, returning from Harvard University with a suitcase full of books. A 1988 Bush Leadership Fellow with a master’s degree in community organizing, she planned to spend the summer writing her doctoral dissertation about administrative planning and social policy. Those plans changed, however, when a group of Anishinaabe elders came to her with tobacco — a traditional token of respect — and a request to speak for them in their fight against corruption in the tribal government.

“I put my books away,” Vizenor recalls. “They stayed unpacked for five years.”

With more than 19,000 citizens, White Earth is the most populous of the 11 tribal nations that share geography with Minnesota. At the time of Vizenor’s return from Harvard, citizens had growing concerns about their tribal government: Tribal officials were often elected without primary elections, winning with pluralities as low as 20 percent; the tribal council often overruled or controlled tribal courts, police, jobs and election results.

The years-long struggle against the status quo that followed would result in federal corruption convictions against three members of the tribal council. The fight would also propel Vizenor to national prominence as a champion for governance reform.

Reform has been the driving theme of Vizenor’s leadership of the White Earth Nation.  When she was elected tribal chair in 2004, she pointedly retained every tribal employee, ending what some saw as a patronage system and making it clear her eyes were set on reform. And after she was elected to a second term in 2008, she called for a constitutional convention; a year later, delegates ratified a draft document that had been shared with citizens at 55 informational meetings across White Earth.

And, last November, nearly 80 percent of White Earth’s voters approved the new constitution, which establishes an independent and separate judiciary and restricts the authority of the tribal council — measures Vizenor says were necessary to assure investors that partnering with economic development projects on the reservation is a safe bet.

Vizenor attributes her tenacity to her traditional values, her upbringing and the influence of her late husband, Dallas (he died in 1998; the pair were high school sweethearts who rode the school bus together to school in Park Rapids, Minnesota). But she also gives credit to the Bush Fellowship that sent her to Harvard and put her on a path that has sent ripples of reform through Indian Country.

"I’m so grateful to the Bush Foundation,” Vizenor says, “Most of all for the profound learning opportunities. I would never have been able to afford to go to Harvard on my own. And the degree from Harvard opened so many doors for my tribe. It has given credibility to me.”

Vizenor’s term as chairwoman will end by 2016. She is 69. After 20-plus years of work that started with doing what the elders asked of her, she is confident that the new constitution is on track and that differences with the Minnesota Chippewa Tribe that currently delay its implementation will soon be resolved.

After all, Vizenor’s traditional Ojibwe name, given to her by her grandmother, does not suggest that she is going to give up easily.

Esh-quay-gah-bowah-e-quay, is the name. The Last Standing Woman.

“The Anishinaabeg of the White Earth Nation are the successors of a great tradition of continental liberty, a native constitution of families, totemic associations. The Anishinaabeg create stories of natural reason, of courage, loyalty, humor, spiritual inspiritation, survivance, reciprocal altruism, and native cultural sovereignty.

“We, the Anishinaabeg of the White Earth Nation, in order to secure an inherent and essential sovereignty, to promote traditions of liberty, justice, and peace, and reserve common resources, and to ensure the inalienable rights of native governance for our posterity, do constitute, ordain and establish this Constitution of the White Earth Nation.”