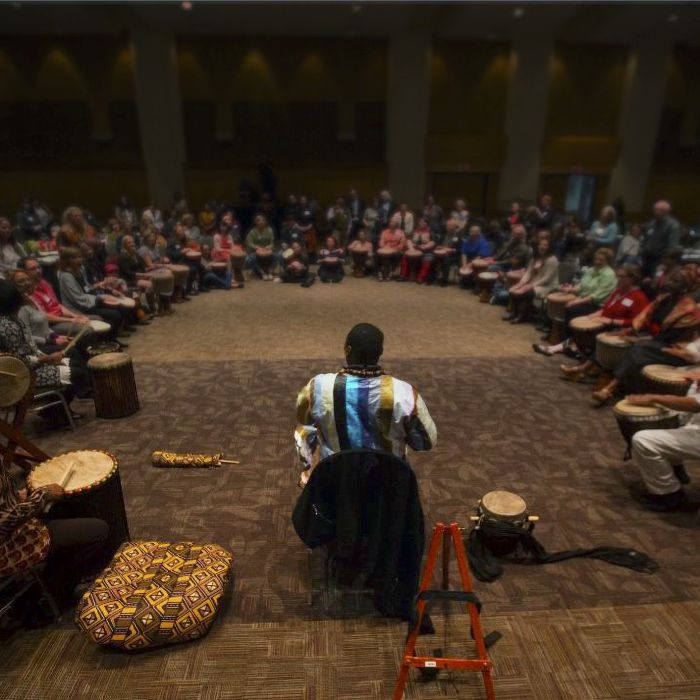 Samba Fall of the Multicultural Kids Network leads a closing drum circle at a Building Resilience event at the Saint Paul RiverCentre in 2016.

Suzanne Koepplinger, director of the Catalyst Initiative at the Minneapolis Foundation, straddles worlds. The world of philanthropy, with its paperwork, processes and tidy benchmarks, can feel like a separate world from the visceral, complex and raw challenges of real life. With the Catalyst Initiative, Koepplinger bridges the divide. And support from the Bush Foundation in recent years has amplified the initiative’s impact.

A catalyst is an agent that provokes or accelerates significant change or action. And that’s just what the Catalyst Initiative was designed to do when the George Family Foundation launched it in 2014. For two decades, the foundation led efforts to transform healthcare to include integrative health and healing approaches. But they still weren’t seeing the results they had hoped for.

In 2015, Catalyst came out of the gate ready to act, with a focus on building resilience, healing trauma, and contributing to positive health outcomes at the individual, organizational and community levels.

“Bill and Penny George were frustrated with the glacial pace of change at the systems level,” says Koepplinger. “So they decided they needed to come at it from both directions — from the top down and from the bottom up.” In 2014, they hired Koepplinger (a former George Family Foundation grant recipient in her capacity as executive director of the Minnesota Indian Women’s Resource Center) to work on the grassroots angle, with the aim of building integrative health and healing from the ground up. And the Catalyst Initiative was born.

Most of the first year of Catalyst’s existence was dedicated to listening, says Koepplinger. “They gave me the gift of nine months of asking people in the communities with the highest health disparities throughout Minnesota (veterans; gender non-conforming people; Black, Brown, and Indigenous people) what they need.”

Koepplinger started with her networks of community-based healers and expanded from there. “Philanthropy has a bad habit of only talking to our go-to people, which is sometimes insufficient,” she notes. For nine months, she sought out members of the communities Catalyst wanted to target and asked: What does integrative health and healing mean to you? Who are your healers? How can we support your efforts to heal in your own ways, in your own communities?

In 2015, Catalyst came out of the gate ready to act, with a focus on building resilience, healing trauma, and contributing to positive health outcomes at the individual, organizational and community levels.

They led large group convenings, inviting early adopters of integrative health practices to expand their networks throughout the state. They offered training and skill building to selected individuals and intermediary organizations. And they provided one-time seed grants to allow nonprofit organizations to build upon the vision of healthier populations through mind-body-spirit work meaningful to them.

Representative grants included those to African Aid to create an East-African-specific resource guide, a grant to OM Collaborative to create a community wellness coaching model in the African-American community, and a grant to Ampersand Families to support the use of a holistic mind-body approach to help adopted teens heal from trauma.

“In our first three years, there was a lot of innovation and calculated risk,” says Koepplinger. Catalyst Initiative gave nearly 60 seed grants. “Some of those were wildly successful, using approaches I never would have thought of. Our role was to support solutions the community identified.”

A Relational Model of Support

One of those wildly successful grants went to the Irreducible Grace Foundation (IGF) in St. Paul. IGF creates safe spaces and healing opportunities for youth of color. Catalyst’s funds supported a Fostering Wellbeing workshop with youth facilitators, young people, and other community members.

That grant in 2015 marked the beginning of a fruitful relationship, which exemplifies how Catalyst deviates from the business-as-usual model of giving. “At Catalyst, we don’t use a transactional process,” explains Koepplinger. “We’re in a relational process over time. My role is not simply to process grants, but to be a connector and a listening board.”

The value of this relational process became clear when the COVID pandemic hit in 2020. IGF was preparing to take its programming into elementary schools, and lockdowns meant they had to pivot quickly. “Suzanne led us to people who can do audio and video taping, so we could create an online healing series of animated videos” says Fry. Now 18 local schools have subscriptions to IGF’s series, giving them a much greater reach than the four or five schools with whom they had originally anticipated working.

“Catalyst’s approach is, ‘How do we walk alongside and support you?’” says Darlene Fry, Ph.D, IGF’s founder and executive director. “Suzanne is a touchstone for us now. She brings resources, wisdom and connection to things happening in other spaces that we wouldn’t be in. They didn’t just give us money and say, ‘See you later!’ It was a seed, and the relationship grew over time.”

Koepplingler’s relationships with grantees continued to thrive even as the Catalyst Initiative transitioned from being based at the George Family Foundation to the Minneapolis Foundation in 2018. The move allowed Catalyst to connect with outside funding sources and to continue offering funding to non-5013c organizations.

This transition was critical for Catalyst’s goals to support healing in communities with the greatest health disparities. “So much of our work is focused on healing trauma in communities, but the people doing that work are just healers, often working other jobs,” says Koepplinger. “There’s no reimbursement model for non-clinical healing — these people are doing the work because they want to heal their people. I say, ‘Let me fund you so you’re not burning out.’ This is what the communities tell us they want.”

In 2019, the Bush Foundation awarded the Catalyst Initiative $1.5 million to support its work. “A lot of the work I’ve been able to do in the last two years is entirely because of the Bush Foundation,” says Koepplinger. “It was a huge validation that this work matters, and it gave me a platform to do more investing in key partners.”

Catalyst used the funds to give two-year grants to five community organizations advancing self-care. Among them are Irreducible Grace Foundation and Open Path Resources, which works with Hennepin Healthcare to provide patient access to Muslim spiritual care and expand utilization of the Islamic Mind-Body Medicine Toolkit in the East African community.

“We saw so much attention being paid to the loudest voices, and we wanted to support the quieter efforts to help people settle their central nervous systems and breathe together.”

They were also able to do responsive grantmaking in the wake of COVID-19 and the racial justice uprising last year. For example, Catalyst contracted an Indigenous elder named Nancy Bordeaux to train a cohort of Indian women on healing the wounds of historical trauma.

“The disproportionate impact of COVID on Indian populations has a lot to do with poor health care access, comorbidities, and the high rates of disease in Indian people,” says Koepplinger. “We’re trying to support the elders who are doing that healing work, so people begin to understand their capacity to own their own wellness. Healing the wounds of historic trauma is the first step.”

In 2019, the Catalyst Initiative hosted a Youth Cultural Healing Summit with Marnita’s Table, a nonprofit that addresses inequities across healthcare, education and social justice by enabling people to connect and collaborate across differences. The Summit featured performances by youth from the Irreducible Grace Foundation and offered tips and techniques for building resilience and healing from trauma.

In the aftermath of the murder of George Floyd and the social unrest that followed, Catalyst and Marnita’s Table teamed up again to offer another convening in south Minneapolis. More than 125 people across Minneapolis wards 8, 9 and 12 came together in a virtual gathering to share their anxiety, grief and trauma, as well as learn about resources for healing and calming practices.

“We saw so much attention being paid to the loudest voices, and we wanted to support the quieter efforts to help people settle their central nervous systems and breathe together,” says Koepplinger. “That’s a prelude to doing good work.”

A Rainmaker for Change

Catalyst’s world-straddling work extends all the way to the state Capitol. In 2019, Koepplinger worked closely with state legislators to propose a bill on non-narcotic pain management funding to address the opioid crisis. The bill passed as part of a larger omnibus opioid bill, providing $1.3 million in funding to be distributed by the Minnesota Department of Health for non-narcotic pain management.

Arti Prasad, MD, chief of internal medicine at Hennepin Healthcare, is leading two projects that received funding through the MN DOH to promote non-narcotic pain management throughout the state.

From the legislature, to the clinic, to the foundation board room, to the traditional healing circle, Catalyst Initiative embraces every possible angle for creating more health and healing. 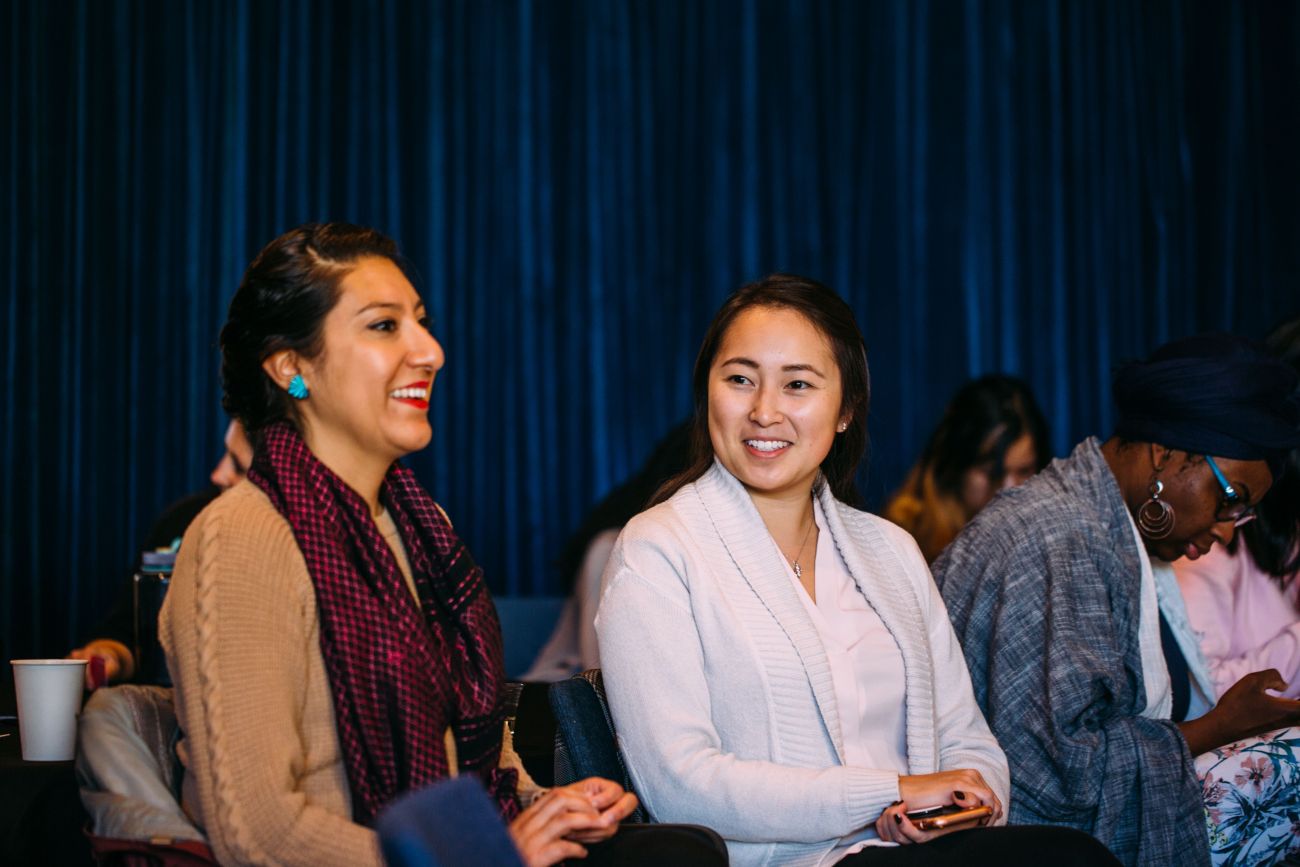 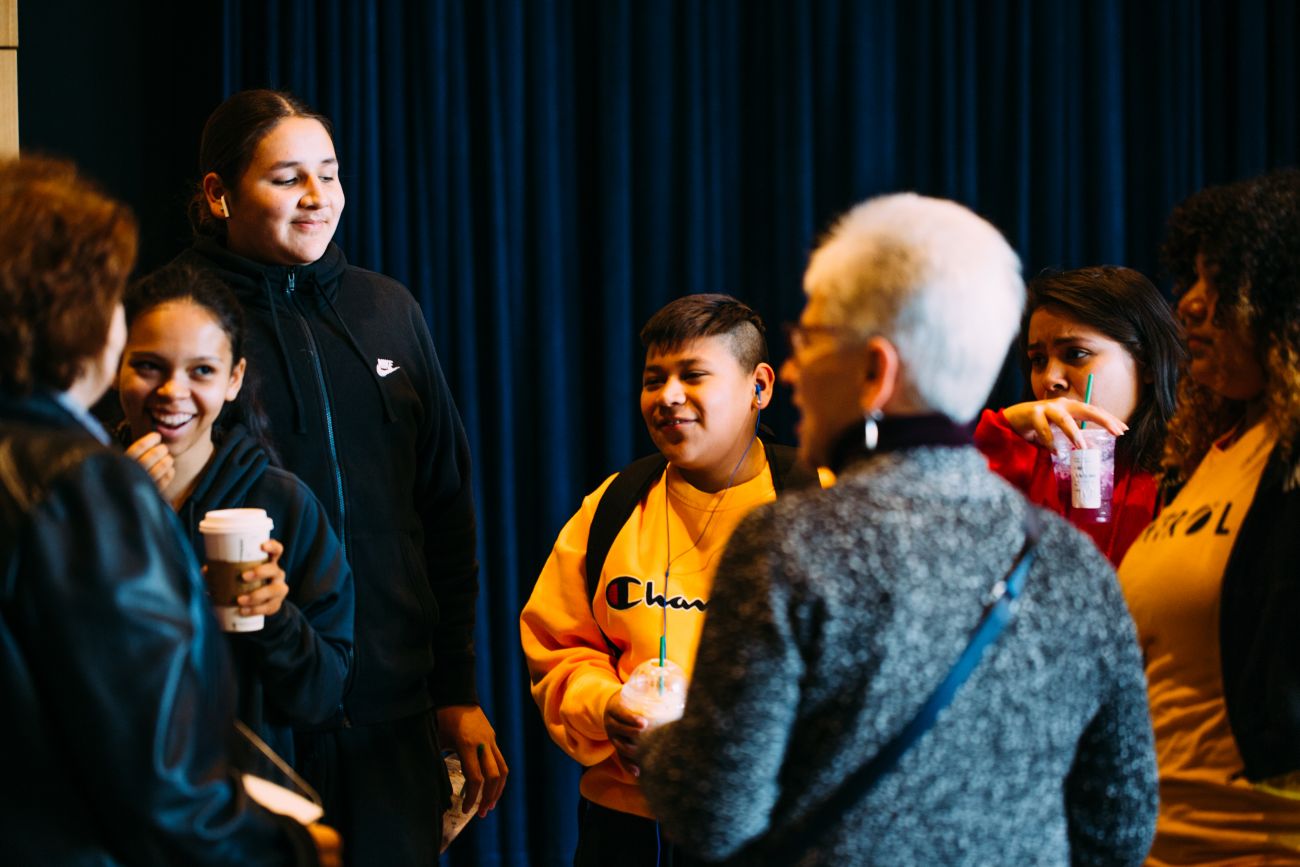 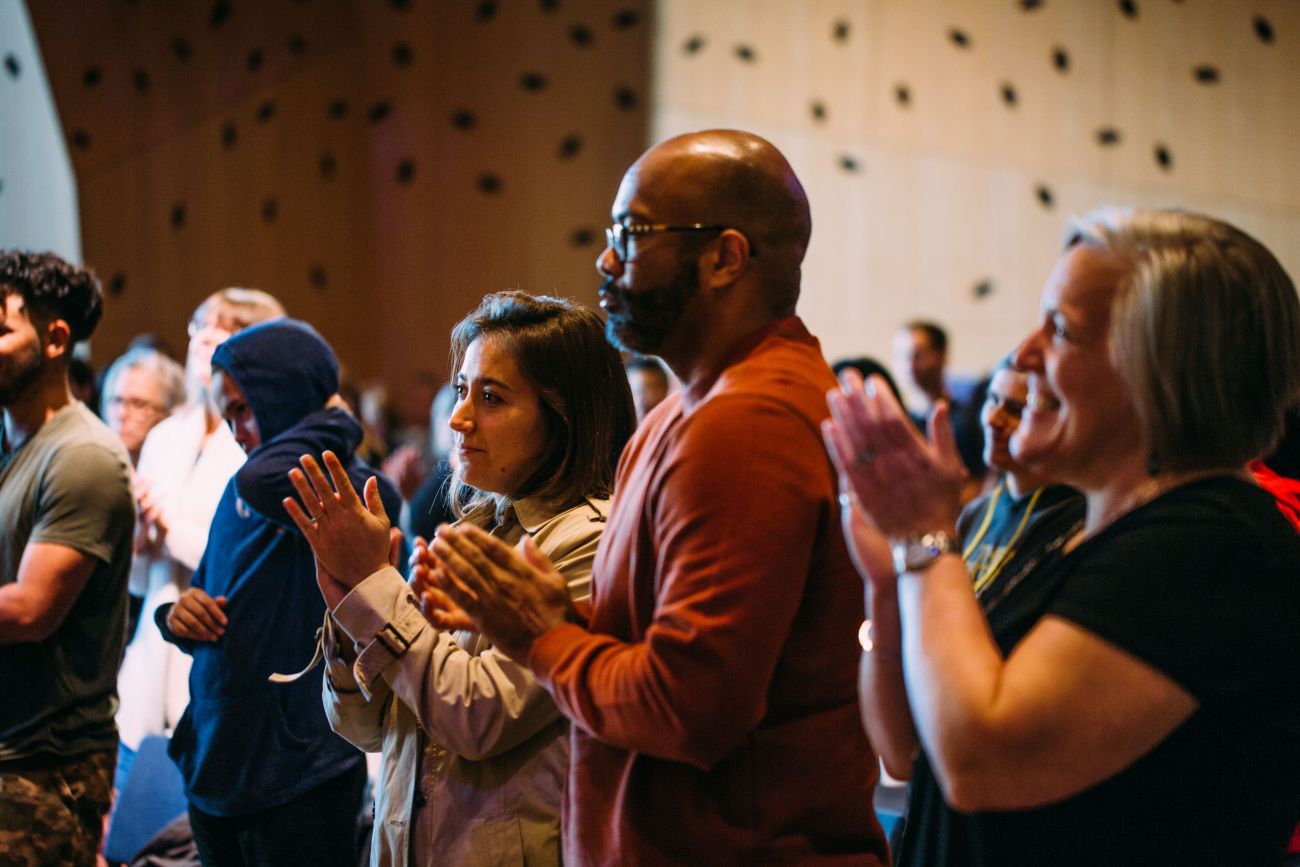 Audience members react to the youth performers at the 2019 Youth Cultural Healing Summit.

“Our organization couldn’t have done this if Suzanne hadn’t worked so diligently to get this project through the legislative process,” says Prasad. “She provided expertise, guidance, and content around the development of the RFP to the Department of Health, and she stayed connected with several grantees throughout the long process. It was her brainchild and dream, and it’s coming true.”

From the legislature, to the clinic, to the foundation board room, to the traditional healing circle, Catalyst Initiative embraces every possible angle for creating more health and healing.

And it all starts with healing trauma — in ourselves, our communities, and the organizations advocating for change. “This is about our human being-ness,” observes Koepplinger. “It’s about creating movements fueled by generative practices, and creating sustainable systems change that reflects what the community tells us they need. Then it’s not just ‘philanthropy as usual.’” 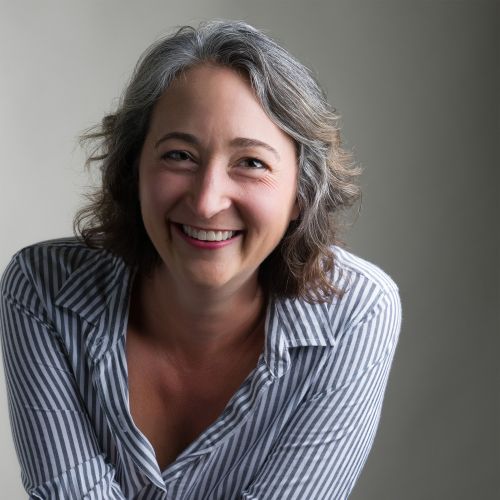 Mo Perry is an independent writer and journalist in Columbia Heights. She is also the co-founder of Logosphere Storysmiths, which crafts vivid narratives for impactful companies and leaders. 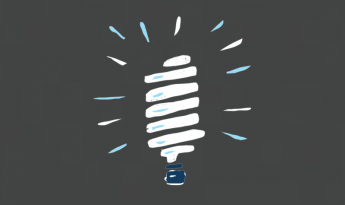 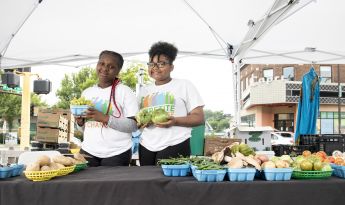 Appetite for Change puts North Minneapolis in control of its own food spaces. 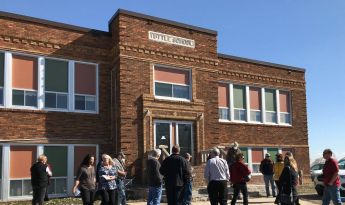