Who is Irv Weiser?

Can you share about your career and volunteer work?

I went to law school in New York and came to Minneapolis in 1973 to work as an associate for Dorsey & Whitney, where I worked for 12 years. Later I left the practice of law and became president and CEO of RBC Dain Rauscher. I did a lot of volunteering for a couple reasons. One, I had the desire to give back. The other, frankly, is it was fun. You get a window into a broader community. During my tenure on the Bush Foundation Board, I have met people I don’t think I ever would have met otherwise.

Where were you born?

My parents were Holocaust survivors, and I was born in a refugee camp just outside of Munich in 1947. I lived there for two years before we moved to Buffalo, N.Y. There were a lot of different ways that parents and children dealt with the war. It was just something we never asked in our family. I think I was 21 the first time that I learned anything about my dad’s experiences in the war, and he told me everything since. I videotaped my father telling his life story, which was a great thing to do because he died 10 years after I did it.

What accomplishments and awards are you most proud of?

I get Father’s Day cards from my daughters that say I’m a great dad, and I get them every year. My wife and I have been married 46 years, and we have two adopted daughters from Korea.

Who has influenced your life the most?

My father. I think sometimes it takes a long time to realize what you learned from your parents. But I think my father was a very hard-working man. He worked six days a week, three nights a week. He always put family above everything else.

What is your favorite quote?

My father had a quote he used to tell us. “If I’m not for myself, who will be? If I’m only for myself, who am I? And if not now, when?” That has always guided my life. I’ve always believed you have to take responsibility for yourself but you have to hold the door open for others in front of you. 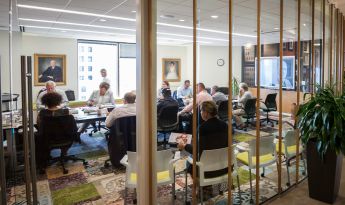