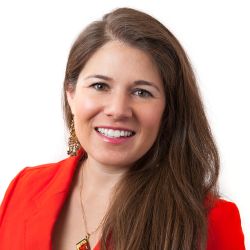 As Vice President of Grantmaking, Anita provides leadership and support to the grantmaking team to ensure we are doing the most possible good through our core grant programs. She is active in a wide range of community conversations, supporting equitable change across the region.

Anita was previously the Leadership Programs Director where she worked to inspire, equip and connect leaders. She loves working with amazing teams in her roles.

Prior to joining the Foundation in 2015, she spent over a decade developing leadership, equity and justice programs as Vice President for Racial Justice and Public Policy at the YWCA of Minneapolis. Her career also includes work in the domestic violence field, immigrant and refugee services and a stint as a walking molar representing her family’s dental practice in local parades.

Anita was a Change Leader in Philanthropy Fellow and Hubert H. Humphrey Public Leadership Award recipient. She was named a 40 Under 40 honoree by the Minneapolis/St. Paul Business Journal and a Top Six Business Leader Under 30 by Minnesota Business Magazine.

Anita earned a bachelor’s degree from Valparaiso University and a master’s from the Humphrey School of Public Affairs. She serves on the boards of Voices for Racial Justice, the Women’s Foundation of Minnesota and Grantmakers for Effective Organizations.

As someone who grew up in greater Minnesota and went to high school in Granite Falls (Archibald Bush’s hometown), Anita believes in the talent that lies all across the Bush Foundation’s region.