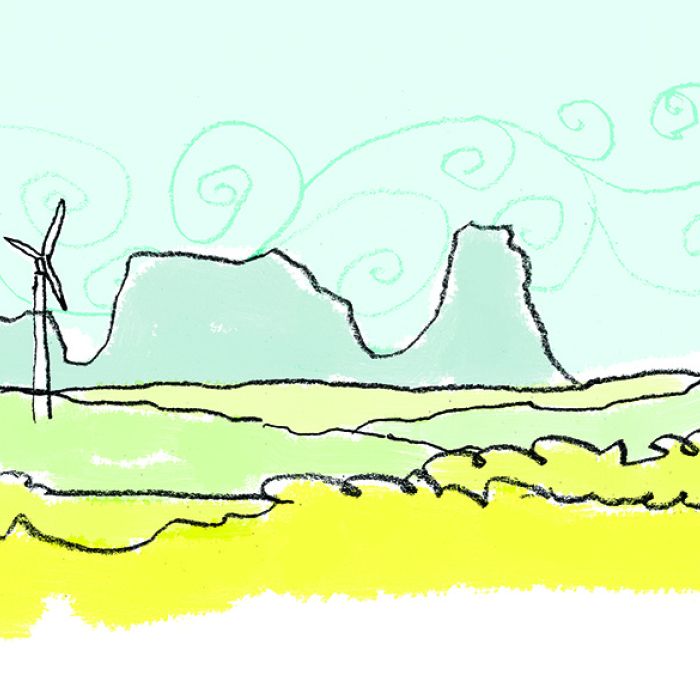 The prairie winds that roll across South Dakota and eight Sioux nations carry the potential to produce three times the electricity their citizens can use. Harvesting the wind energy — and the green jobs that go with it — has long been the goal of the Oglala Sioux Tribe. But year after year, it ran into the same roadblock.

“We’d been trying about 10 years now to establish a commercial wind farm that belonged to us,” says Lyle Jack, development manager for the Tribe’s Office of Economic Development. “We tried every model there was to make this a reality, but every time you’d get investors interested in the idea, they’d want ownership of the project.” Aware that other Sioux tribes across South Dakota, the fifth windiest state in the country, were encountering the same hurdle, he says, “We decided it was time to reach out and see what we could do together.”

“The potential of this is staggering,” former President Bill Clinton said at the Clinton Global Initiative in July 2013. That's where Oceti Sakowin — Lakota for the Seven Council Fires of the Sioux Nation — shared its plans for the first time. "This is an amazing thing, and if it works, there are a lot of other tribal lands and a lot of other tribes out there who will be able to take this and make their contribution to our country's future."

Oceti Sakowin partners pitched the project to President Obama last summer during his historic visit to the Standing Rock Sioux Reservation. In November, tribal leaders met with eight federal agencies in Washington, D.C. Despite the support of two presidents, the project still faces stiff headwinds before it can move forward with plans to issue up to $3 billion in power revenue bonds. “There are still lots of obstacles,” Jack says. The project will need to come up with about $11 million in seed money, a high financial hurdle for tribal communities settled across several of the most impoverished counties in the United States.

High-risk projects like this can be unsettling for some funders, but Mandy Ellerton, co-director of the Foundation’s Community Innovation work, says the groundbreaking nature of the Oceti Sakowin Power Project helped push it through the 2014 Community Innovation Grant selection process. “The projects we want to fund are the ones that tackle tough issues — problems communities don’t know how to solve yet. Our support gives them time and space to work toward a breakthrough,” Ellerton says. The Foundation launched this new, open grant program in 2013 because “instead of supporting the program-focused work organizations have always done, we want to get behind groundbreaking ideas that haven’t been tried or fully realized before.”

Tribal communities have been particularly successful at earning Community Innovation Grants. Of the 69 projects funded since 2013, 16 have been to projects in tribal communities. For instance, the Native American Community Board is using its radio station to support the Yankton Sioux people in a rural community coping with chemical dependency, relationship violence and high drop-out rates. Grassroots Indigenous Multimedia in Minneapolis is creating a culturally relevant early childhood curriculum that builds on a recent explosion of Ojibwe language revitalization. With its grant, the Leech Lake Band of Ojibwe’s Green Team is partnering with University of Minnesota Extension on a self-sufficiency effort aimed at revitalizing traditional food practices. And REAP Investment Fund is supporting volunteer and paid plan directors in 19 western North Dakota counties as they implement new county or tribal strategic plans for addressing challenges caused by the oil boom and  sustaining economic viability post-boom.

In 2009, the Foundation had focused its work in Indian Country on partnerships with elected tribal leaders that support their unique plans for expressing their nations’ self-determination. The launch of Community Innovation Grants in 2012 opened the door for all community organizations, including those led by and focused on serving Native people, to approach the Foundation for support. Ellerton says the selection panel was thrilled to see in the mix of applications so many from tribal communities addressing issues that ranged from hunger to homeownership strategies on tribal lands.

“We don’t want to support top-down, go-it-alone strategies. We want groups that are partnering with their communities to solve problems,” Ellerton says. “Some of the ideas we fund will fail; that’s a huge part of the process of innovation. Our goal is to create the space for experimentation to happen.”

Oceti Sakowin is in that experimentation stage, and the future is not certain. Jack admits that bringing so many tribes to the same table has posed challenges. “Some tribes have more land, some have more wind,” he says, and each community has different priorities. “That’s always a hard thing to do — to get tribes to work together — but once you start looking at reaching the same goals, then you can set aside the differences and start breaking new ground.”