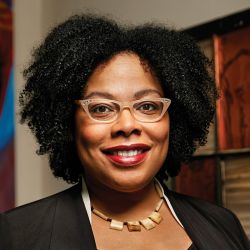 DeAnna brings to the board expertise on women and people of color in leadership, equity in the arts, locally rooted creative placemaking and asset-based youth development. She has presented about her work at New York University, Harvard University, the University of Minnesota and Macalester College.

DeAnna is a 2007 Bush Fellow who earned a masters of public administration from Harvard in 2009. She was named a 2013 Arts Hero by Minnesota Public Radio.

DeAnna and her husband Roger Cummings previously led Juxtaposition Arts, a 2013 recipient of the Bush Prize for Community Innovation.

Learn more about DeAnna in an extensive article in the Foundation's bMagazine.