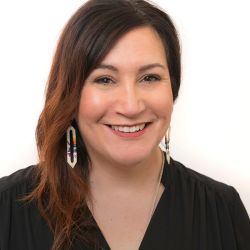 Eileen joined the Bush Foundation in 2016 and directs the Nation Building and Government Redesign Portfolio. Her work centers on supporting native self-determination and helping governments solve problems by better understanding and designing for the people they serve. She’s a member of the Cheyenne River Sioux Tribe, and has over two decades of experience working with tribal government, native non-profits and tribal colleges.

Eileen is a Bush Fellow and the Vice President of the Minneapolis American Indian Center board of directors. She loves to sew, especially ribbon skirts and shirts, and is often on the hunt for cool material or ribbon combos. She loves her family and friends across the region and doesn’t think twice about a seven to eight hour drive to catch a basketball game or make it to a birthday party.