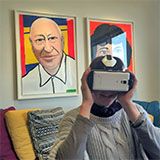 The team at Visual is creating a 3D social media viewer where users can experience photos and videos in their own visual universe via the Samsung Gear VR and Oculus DK2.

Although still in the initial seed-stage for raising capital, Visual gifted company shares to 2013 Bush Prize winner Juxtaposition Arts to incorporate an element of social good into the early renditions of their company. Visual also plans to work with Juxtaposition’s students in the future.

Juxtaposition Arts is an education program, teen-staffed design enterprise and locally rooted cultural development center founded in 1995. They create community building and economic development opportunities that unleash the creative genius of young people on the Northside of Minneapolis.